Ottawa County, Ohio, was created on March 6, 1840, from portions of Erie County, Lucas County and Sandusky County. The county was named for the Ottawa Indians who inhabited the area and traded furs and skins with early settlers. The name Ottawa comes from their language which means “trader”.

The west end of the county was one of the last areas to be settled as it was in the eastern end of the Great Black Swamp, as the swamp was almost uninhabitable due to disease and the difficulty of travel. Whereas the far eastern part of the county was part of the Firelands which was acreage set aside as restitution for residents of the Connecticut towns whose homes were burned by British forces during the Revolutionary War and part of the larger Connecticut Western Reserve.

Ottawa County is the largest county of Ohio’s 88 counties due to its borders extending out into Lake Erie and encompassing the islands that make up one of its twelve townships, Put-in-Bay. The other eleven townships are Allen, Bay, Benton, Carroll, Catawba Island, Clay, Danbury, Erie, Harris, Portage and Salem. The County Seat is located in Port Clinton.

The county was settled by various immigration groups. Those of German ancestry settled in the western portion. These were mainly farmers that drained the swamp and created highly productive farmland. The French were the fishermen and trappers settling along Lake Erie shores and the county’s many waterways and marshlands. The Danish were in the minority cultivating the orchards as fruit growers on the islands and Catawba peninsula. The Slovaks were the immigrants that worked the many quarries that dot the county. It is currently a diverse county as is much of the United States.

The famous battle of the War of 1812 was fought off the county’s shores, the Battle of Lake Erie with Commodore Perry being the victor. Johnson’s Island was the location of a prison camp for Confederate soldiers during the war of rebellion also known as the Civil War.

The county has several historic sites, museums, libraries, lighthouses, and an arboretum and garden estate. 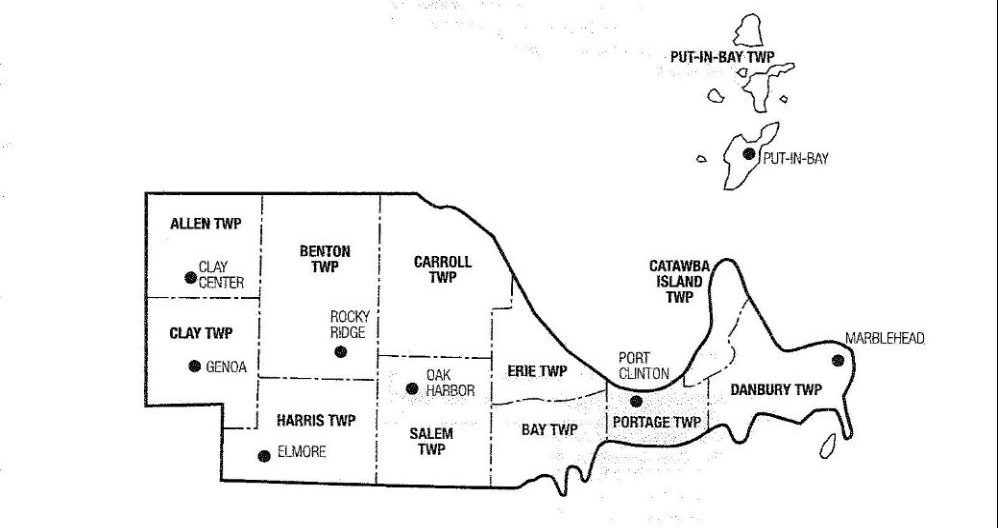